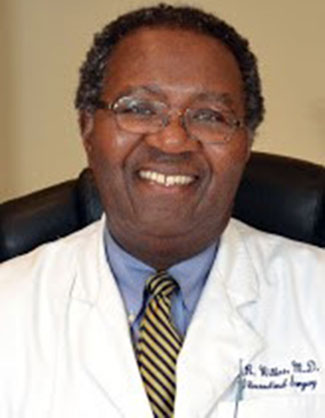 Dr. Wilkes graduated in three years from Alcorn State University, Alcorn State, Mississippi with a B.S. degree in biology, summa cum laude, 1971. He received his M.D. degree from The Johns Hopkins University School of Medicine, in Baltimore, Maryland, in 1975, and performed his internship-residency year in Surgery at the University of  Rochester School of Medicine,  in Rochester, New York in 1976.  In addition he completed his residency in ophthalmology, in the Department of Ophthalmology at the prestigious Mayo Clinic, in Rochester, Minnesota  in 1979. He received the first Mayo Clinic Ophthalmic Alumni Award in 1979, for excellence including research. Dr. Wilkes then completed his fellowship in surgery and diseases of the retina and vitreous, Departments of Ophthalmology, Harvard University, Harvard Medical School, Massachusetts Eye and Ear Infirmary in 1981.  In addition he served on the Staff of the Massachusetts Eye and Ear Infirmary in prior to relocating to Atlanta to establish Atlanta eye Consultants, PC. Dr. Wilkes is a vitreoretinal surgeon who specializes in treating diseases and surgery of the retina and vitreous including diabetic retinopathy. He has published numerous articles in scientific ophthalmology journals and he was the principal investigator of the first statewide diabetic retinopathy screening study performed in the United States, here in Georgia.  In addition he is a member of the exclusive American Society of Retina Specialists.  He has given numerous presentations locally, nationally, and internationally on retinal diseases including surgery, including Paris, France, and Montreal, Canada.  He received his MBA degree from the Coles College of Business, Kennesaw State University, Kennesaw, Georgia, in 1998.  He has been inducted into the Beta Gamma Sigma Honor Society in and Dr. Wilkes is a member of the Phi Kappa Phi Honors Society in Business.  He has been listed in Marquis' of Who's Who in Finance and Industry.  Dr. Wilkes serves as a Deacon at Zion Hill Baptist Church, is a member of the Coles College of Business Advisory Board, Kennesaw State University.  He is a member of the Advisory Board (and currently, the chairman of the Audit Committee and Vice-chairman of the Board of Directors) at Capitol City Bank.  He is member of the Dean’s Council, Rollins School of Public Health, of Emory University; and assistant Clinical Professors of Surgery and Ophthalmology, Morehouse School of Medicine and Emory University School of Medicine, respectively.   Finally he was recently selected for a three-year term on The Alumni Council (its governing body) of The Johns Hopkins University Alumni Association, which has over 140,000 members.   In March 2010, he was selected to serve on the  Board of Directors of the Alcorn State University Foundation, Inc. In 2009, Dr. Wilkes was certified as an executive managerial coach.   Presently, in addition to his current responsibilities, he coaches an executive MBA student at the Coles College of Business, Kennesaw State University, Kennesaw, Ga. Dr. Wilkes remains active in his practice-limited to surgery and diseases of the retinal and vitreous including diabetic retinopathy.